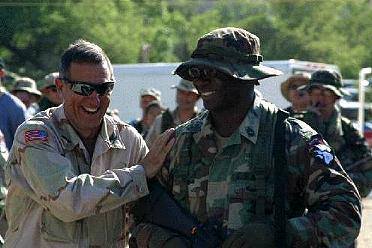 Colonel McKnight never fails to attend every year some charitable airsoft events run by OLCMSS. The first event is one of the best known in the world: Operation IRENE. This event pays tribute to all the soldiers who fell in Somalia and to which he obviously feels very close.

In 2014 Fort Hood, in the heart of Texas, played host to Operation Irene. This is one of the largest US bases on the planet. There, players can enjoy MOUT Training Area 50, an urban training complex like no other.

Zussman Village is one of the three MOUTs (Military Operations in Urban Terrain) to be found in Fort Knox, Kentucky. It could almost be said to be the base of the OLC’s Op. Irene, but it’s not the only place that has welcomed them, it is undoubtedly one of the most realistic urban training centers in the US.

Muscatatuck Urban Training Center (MUTC) in Indiana, is an urban training complex for urban warfare military exercises, civil and military joint operations and civilian rapid reaction teams. It has more than 120 structures and more than a mile of tunnels, besides the famous clock tower that always shows 9:11 (in memory of September 11th).