Why makes the it different? 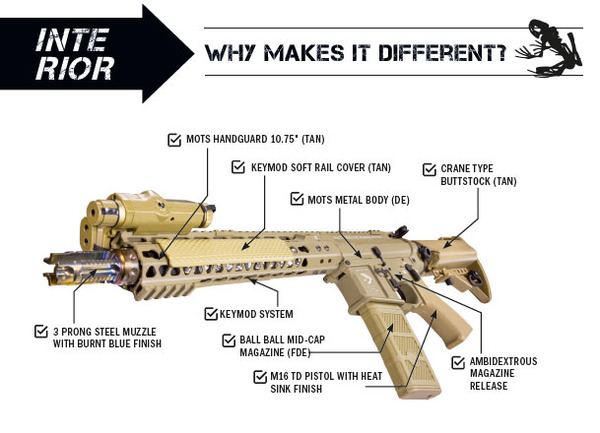 The MOTS 10.75" handguard is colored TAN instead of the Dark Earth of the body(according to the manufacturer) although the difference is not noticeable. It has a slim design thanks to the KeyModx system which lets you add accessories directly like the rail cover that comes with it or RIS rails on which you can mount any extra.

The folding sights are removable and incline 40 degrees to the right and are effective at short distances if you mount a scope with magnification. Turning the gun the hopup will also turn making the ball stop flying in the desired direction from 20-25 m. Any further away and it’s not effective!

The Ball Ball magazine reminds you of a PMAG with its frog skeleton markings an the non-slip areas on both sides. Made of polymer fibre, they have a capacity of 130 balls.

The butt is reminiscent of the VLTOR IMOD (Improved Modular Stock) with details such as the compact design, the perforations on the "membrane" of the stock, its top mounted bolt, QD hooks or the non-slip rubber fitting. The difference is the G&P model does not have removable side modules.