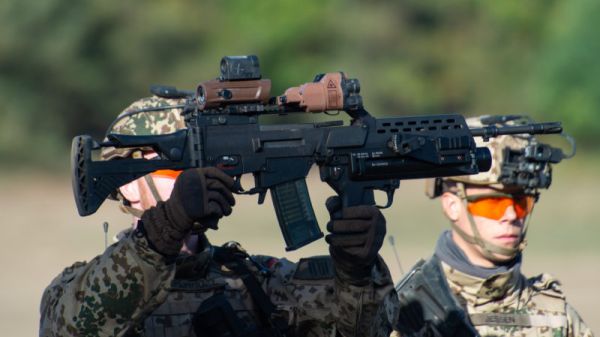 Umarex brings us a G36E manufactured by ARES with an unusual stock, a low rail with RIS and folding sights, a slim handguard that combines RIS, Keymod and HKey mounting slots, and ... yes there is more! A 40 mm AG36 grenade launcher attached below. No, you are not dreaming, and what we are going to show you will be considered the replica gun of their dreams by many players.

Umarex has the licenses of Heckler & Koch which means that you can enjoy a replica truly similar to the real model, which obviously includes showing the real markings of the original G36. A point of added value that although it does not affect the game, many airsofters appreciate due to the extra realism they bring.

The AG36 is a 40 mm grenade launcher with side load (more comfortable than bottom load) after which the model is named. It is coupled to the lower RIS of the handguard, although you could disassemble it and use it independently with the foldable grip that includes in its own lower RIS, using the folding sights to calculate the inclination of the shot. The efficiency of the replica depends entirely on the grenades, but we have tested several types and, regardless of its length, its use is very comfortable.

However, it is worth noting that it has a lid to keep dirt away and that you will have to remember to remove before firing (just imagine the “epic fail”) but it would be more the player's fault than the replica’s.

The model has a handguard longer than that of the K (Kurz) or C (Compact) models. A design made of CNC aluminium, thinner than the conventional polymer, which has Picatinny rails both in its lower and upper part, and on the sides it is replaced by a Keymod line and the HKey mounting slots of the German manufacturer. Although you won’t notice it with the grenade launcher’s configuration, if you use it without it, the grip is more comfortable, closer to what you are used to in the M4 type tactical carbines.

It has an ARES EFCS version 3 gearbox with quick spring change1 by removing a pin to disassemble the piece that will give us access to the spring guide without even having to disassemble the replica. The spring guide2 is made of steel and does not include bearings, and the spring3 is an M120 type. When opened completely, you find some steel gears4 that rotate on two bushings5 and a bearing6, a configuration we have already seen in other models and that achieves great performance. The pneumatic set has polymer piston7 with a metal toothing8 and a piston head9 also made of polymer and without bearings. The cylinder10 is chromed, lacking an opening, and together with the cylinder head11 and the polymer nozzle12 provide a great seal for the set. The 6.04 mm precision barrel13 is 500 mm in length, and works very well with the TM type polymer hop-up chamber14 and the ARES rubber, posting an average of 385 FPS in our tests (please note this may vary depending on the market to which the replica is intended for) and a firing rate of 850 BBs per minute. The electronic EFCS trigger15 (Electronic Firing Control System) offers a smooth and fast firing response, although you can also adjust the hair or the distance the trigger has to travel to shoot. You can program the firing modes of the fire selector but it already has all four positions (safe, semi, burst, auto).

The EFCS has a low-voltage battery detector that stops firing the replica when it reaches a minimum, without danger of discharging the battery too much or damaging the gearbox, and without the annoying beep of other replicas. It offers a low consumption motor start, in addition to supporting higher firing currents (up to 30A) and has a magnetic neodymium sensor for proper piston positioning after each shot. A detail that helps the correct functioning of the gearbox and prevents malfunctions. HK will always be a fetish brand within the world of airsoft, and the G36 is its flagship for many players looking to get break away from the M4/AK dichotomy. But when you bring together both the realism that Umarex brings with official licenses and the robustness in the construction.

ARES is known for, you find a more than interesting set, both for CQB (with the folding stock and grenade launcher) as for open field (thanks to the length of the barrel and how light it feels).