Many thanks go to Doug Banks and his team – the masters of colourisation.

The beauty of these colourised images is that colour, allows you to pick out and study the smallest detail. Do not click on their page – you will become addicted to their work  It is the research that they do on each image that makes the captions themselves a history lesson.

The world’s first global conflict, the “Great War” pitted the Central Powers of Germany, Austria-Hungary and the Ottoman Empire against the Allied forces of Great Britain, the United States, France, Russia, Italy and Japan. The introduction of modern technology to warfare resulted in unprecedented carnage and destruction, with more than 9 million soldiers killed by the end of the war in November 1918. 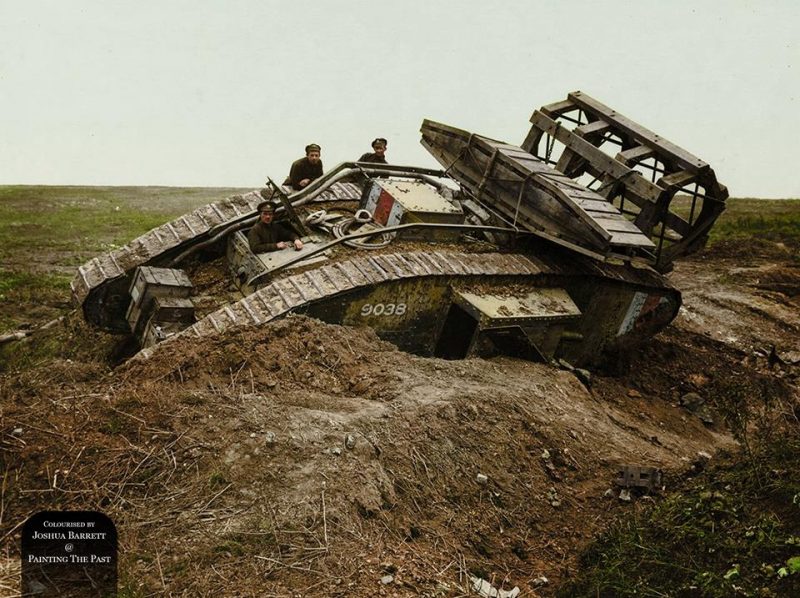 Mk.V tank 9038 of C Coy, 8th Battalion, loaded with wooden bridging material and a specially built contrivance for crossing trenches, stranded in a trench near Cologne Farm, in the Bellicourt section of the Hindenburg Defences, Aisne, Picardie on October 4th. 1918.

9038 was later retrieved and in 1919 was sent to Russia as part of the White Russian Army but captured by the Red Russians on January 1st 1921. 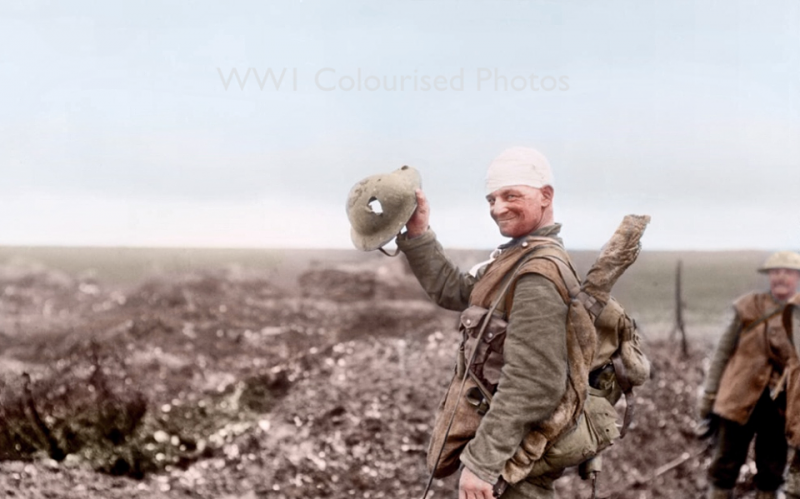 A wounded British soldier showing the shrapnel damage to his steel helmet caused near Beaumont-Hamel, on the Somme Front in December 1916. 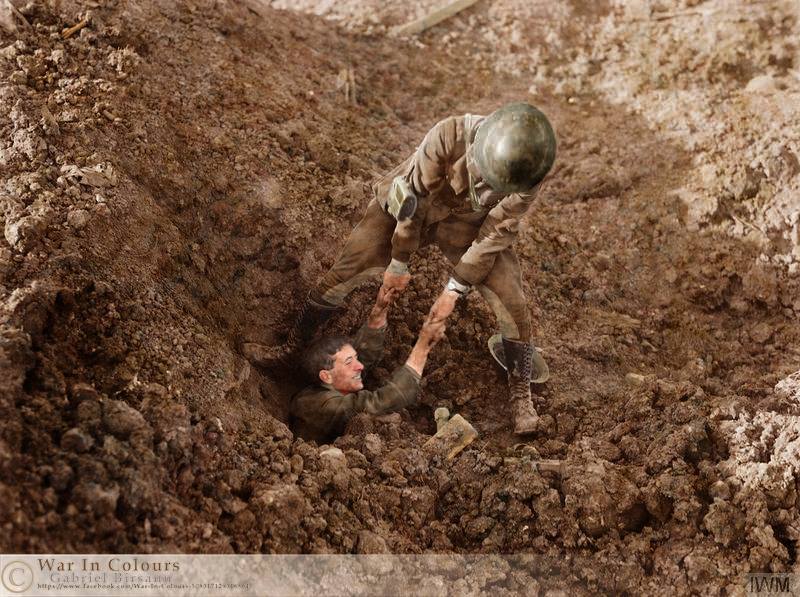 An officer being rescued from a dug-out which has been blown in by shell fire, Mouquet Farm, September 1916.

The fighting at Mouquet Farm was the site of nine separate attacks by three Australian divisions between 8 August and 3 September 1916. The farm stood in a dominating position on a ridge that extended north-west from the ruined, and much fought over, village of Pozieres. Although the farm buildings themselves were reduced to rubble, strong stone cellars remained below ground which were incorporated into the German defences. The attacks mounted against Mouquet Farm cost the 1st, 2nd and 4th Australian Divisions over 11,000 casualties, and not one succeeded in capturing and holding it. The British advance eventually bypassed Mouquet Farm leaving it an isolated outpost. It fell, inevitably, on 27 September 1916. 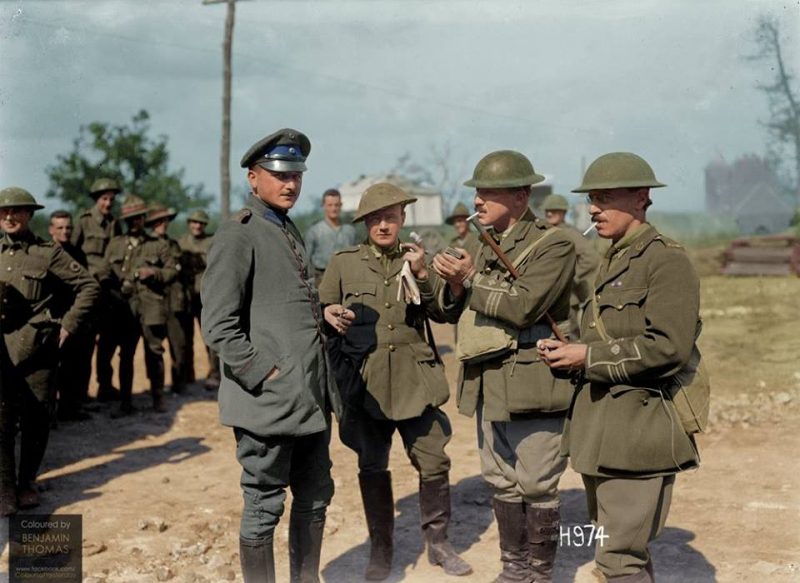 The German medical officer, Lt Schnelling of the 14th Bavarian Regiment, who was detailed to attend to the German wounded and who came to a 3rd New Zealand Field Ambulance station near the front line. Schnelling, left, is pictured with Colonel J. Hardie Neil and Major H. M. Goldstein, M.C. Photograph taken near Bapaume, France, 27 August 1918.

“…… the dressing station was pushed up to Achiet-le-Petit, and 500 casualties were passed through. Here three German medical officers presented themselves. One was the A.D.M.S. of a Naval Division; another, one of his staff; the third, Lt. Schnelling, of the 14th Bavarian Regiment. It transpired that this last was the medical officer who had been in charge of that cellar in Flers in which such ample personal correspondence, supplies, surgical instruments and medical comforts were found, these coming into Major Goldstein’s possession at that time……” (24th August 1918)

(Achiet-le-Petit is about 6kms from Bapaume)

(Colourised by Benjamin Thomas from Australia) 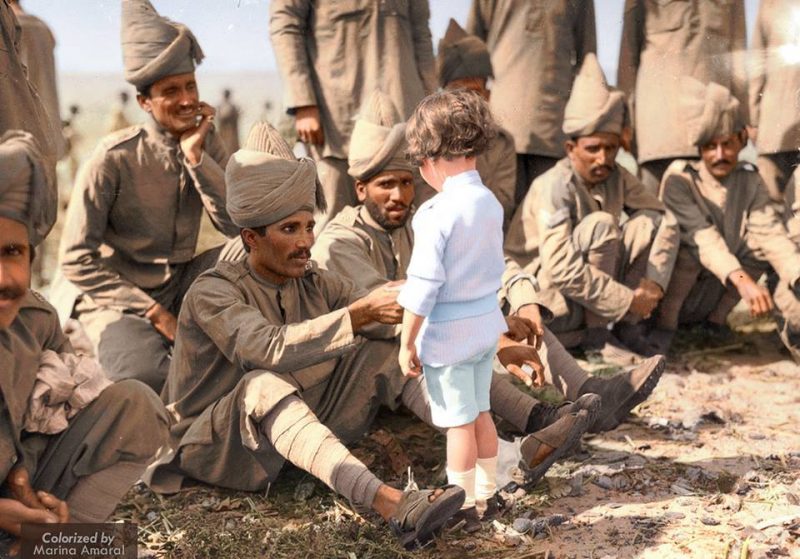 A French boy introduces himself to Indian soldiers who had just arrived in France to fight alongside French and British forces, Marseilles, 30th September 1914.

“On 5 September 1914 General Willcocks took command of the first divisions of Indian Army troops, on 26 September, just seven weeks after the declaration of war, two brigades of the 3rd Lahore Division landed at Marseilles, France. This was notwithstanding the delays caused by the activities of the German raiders Emden and Konigsburg and the slow transport ships. The Sihind brigade had been dropped off in Egypt to reinforce the garrison there and did not make it to the front until November 1914.”

“The Army of India was little understood by the general public and many thought that Indian brigades and divisions were composed of Sikhs and Gurkhas alone, without including the many other races of India. Nor were they aware that in each brigade was a British battalion.”

“The Army of India in 1914 was trained for frontier war or minor overseas expeditions, and for these purposes was to a certain extent sufficiently well armed and equipped, but it was by no means fully so. The two divisions which sailed from Karachi and Bombay had to have their equipment completed at Marseilles, at Orleans, and on the battle front itself. The artillery was only made up by denuding the guns of other divisions and the rifles could not fire the latest class of ammunition with which the British Army was supplied. As a result both rifles and ammunition had to be handed into store at Marseilles and fresh arms issued making things difficult for the troops as most soldiers trained and practised with this weapon to the exclusion of almost all others.”

“Under the Indian officers were the N.C.O.’s all of whom were in charge of a vast array of people from different backgrounds including: Rajputs, Jats, Pashtuns, Sikhs, Gurkhas, Punjabis, sappers from Chennai (Madras State), Dogras, Garhwalis and many others.”

(Colorized by Marina Amaral from Brazil) 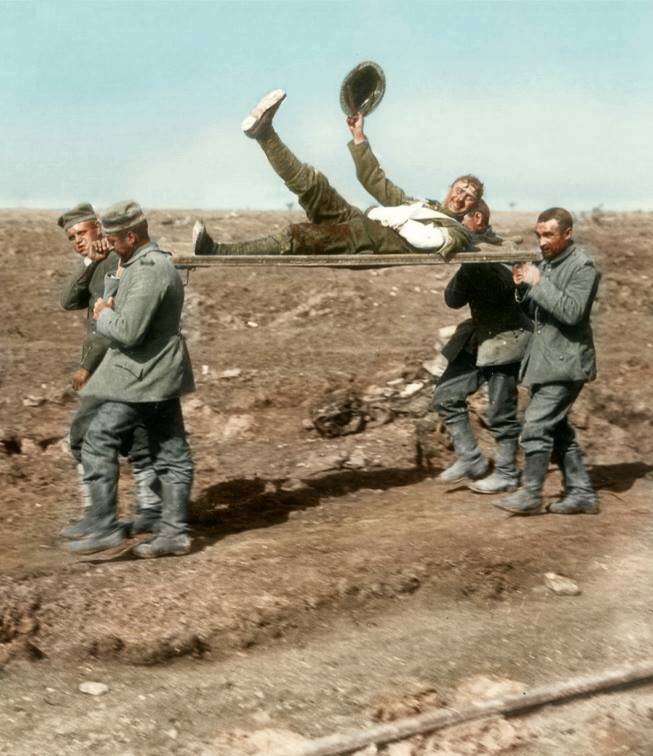 “Take me back to dear old Blighty”

Battle of Flers-Courcelette. A stretcher borne wounded soldier waves his helmet (and leg) as he is carried in by German prisoners. Near Ginchy, 15th September 1916. 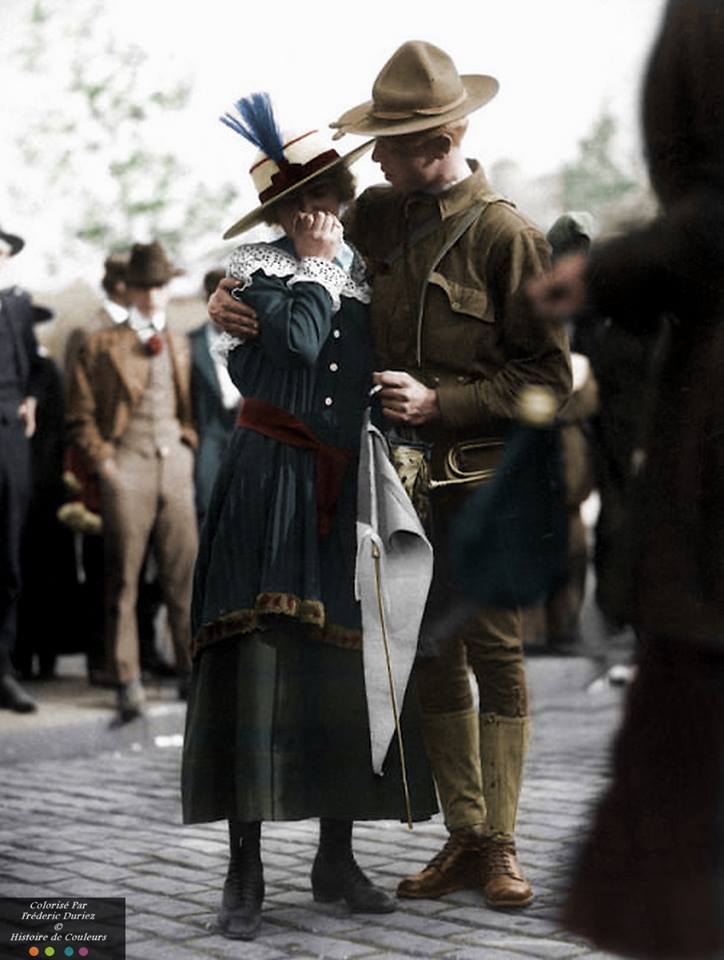 (Just a goodbye … happy Saint Valentine’s Day, young and old because love has no age.)

A soldier of the 71st Regiment Infantry, New York National Guard, says goodbye to his sweetheart as his regiment leaves for Camp Wadsworth, Spartanburg, South Carolina, where the Division is set to train for service, 1917. 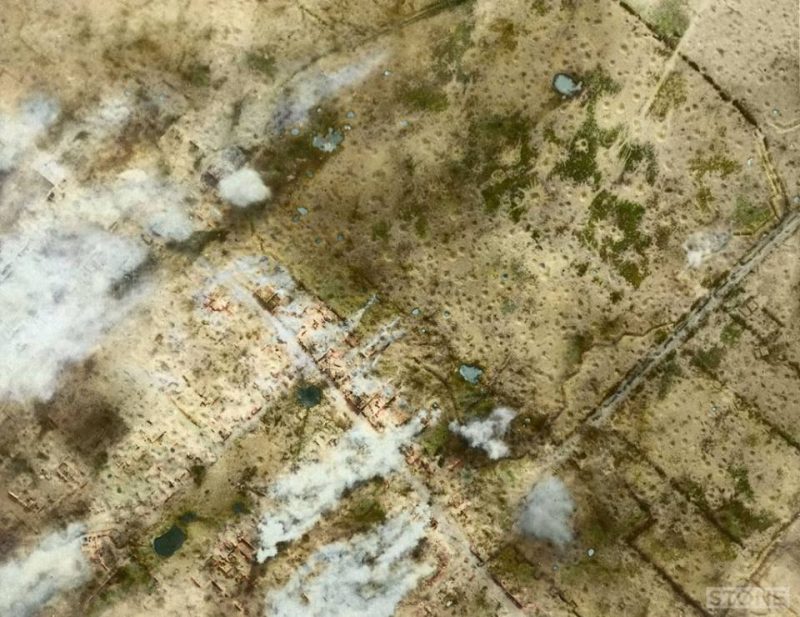 This is an aerial photograph of Messines, just to the South East of Ypres, this was taken on the 2nd of June 1917, just prior to the Mining attack, but presumably during the bombardment judging by the plumes of smoke.

(Colourised by Nick Stone from the UK)

“You start to doubt your sanity slightly when you spend an hour colouring in a photo brown that was, erm, brown, well sepia, but I’ve also tried to pull the detail out a bit as well.”

“…..you can see the scale of it, I realised as I worked on it you can see planks and joists as well as piles of brick rubble in quite a lot of detail, it becomes almost like a video game image, like some morsel of video intrigue from the 1990s, ‘Close Combat’, with it’s crawling terrified and tired men. There I suspect is one of the main problems we have in industrialised warfare, that game image and the fact that there’s real people in it down there somewhere too small to see while you’re pouring shells onto them or bombing them or now of course using missiles and drones. 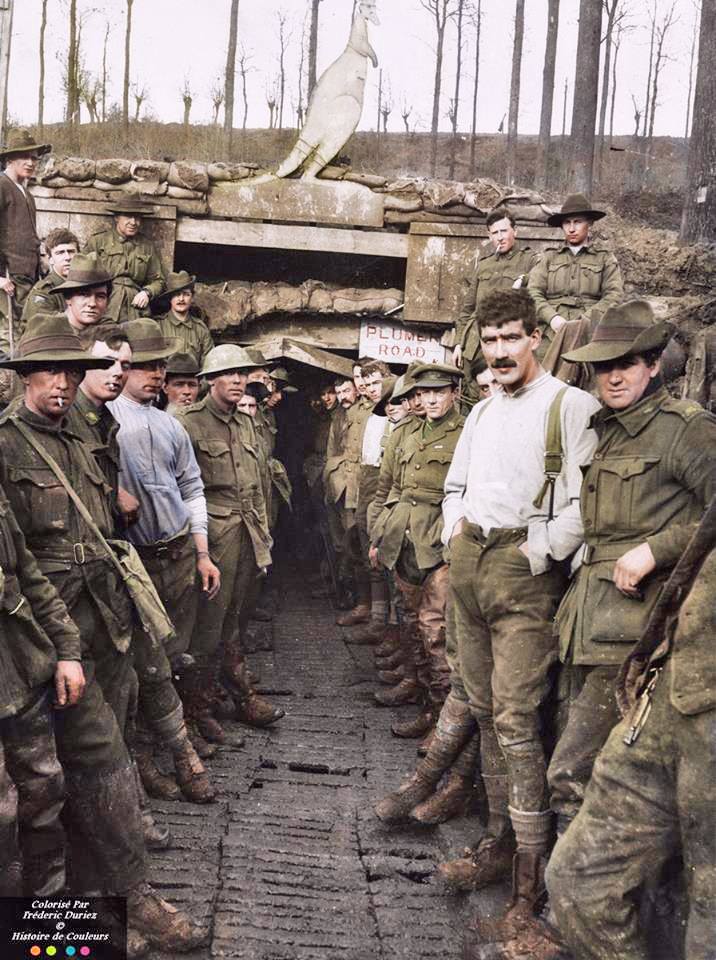 A group of Australian 7th Field Company Engineers at the ‘Plumer Road’ entrance to ‘Wallangara’, or the Catacombs as it was generally called, a system of tunnels built in Hill 63, Messines Ploegsteert Wood, 22nd January 1918.

The soldier on the right in the white shirt has been identified as Driver – Alexander Henderson Priest (17822) from Collingwood, Victoria (demobbed in 1919 in good health) 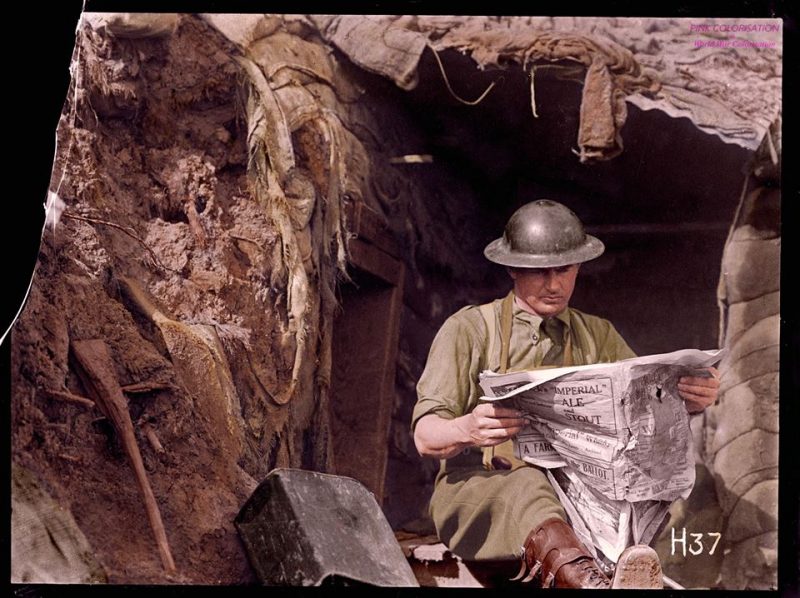 A New Zealand Officer sits at the entrance of a dug-out in the Front Line, reading a newspaper. Near Messines, Belgium May 15 1917.

(Colorised by Benoit Vienne from France) 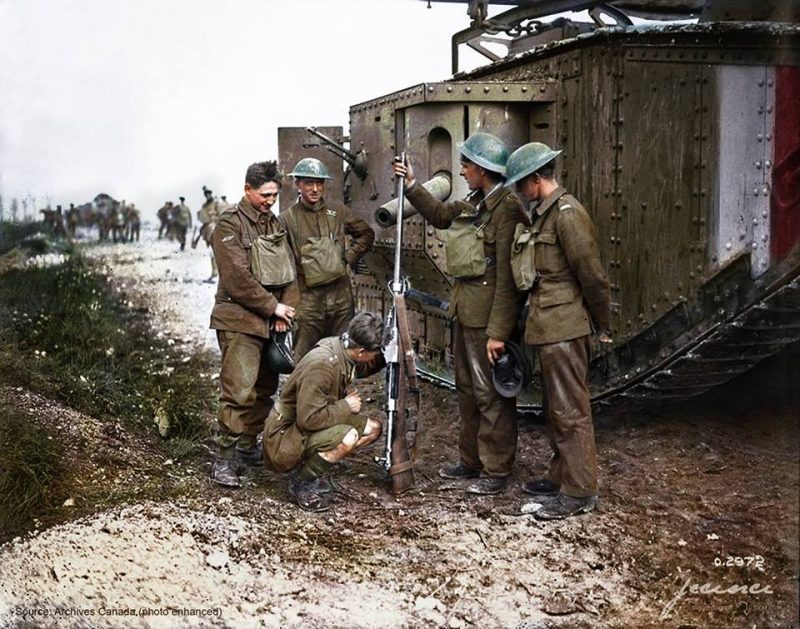 A Mauser T-Gewehr – German anti-tank rifle, being admired by some Canadian soldiers and the crew of a RTC Mk.V tank during the Battle of Amiens.

(Colorised by Paul Kerestes from Romania) 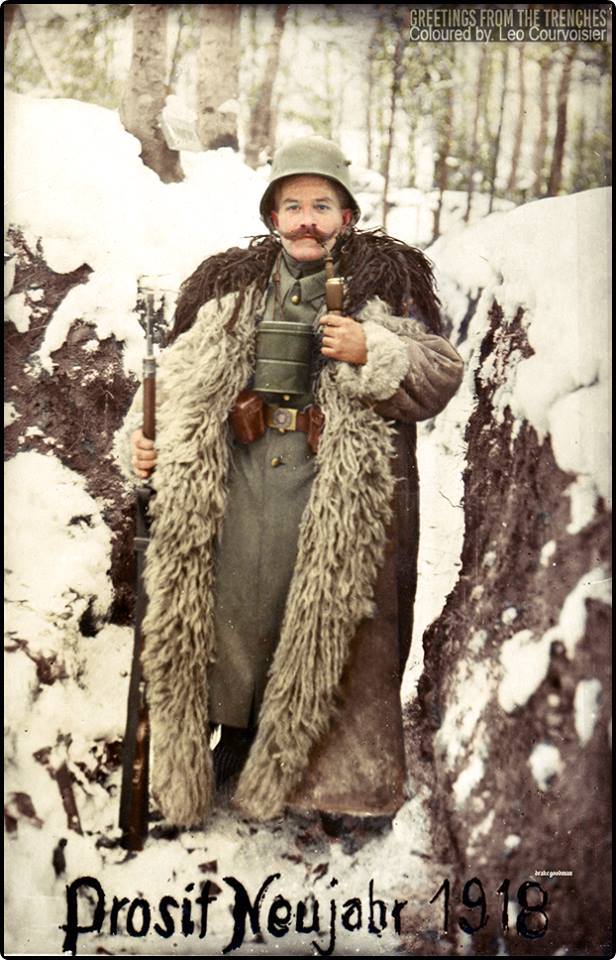 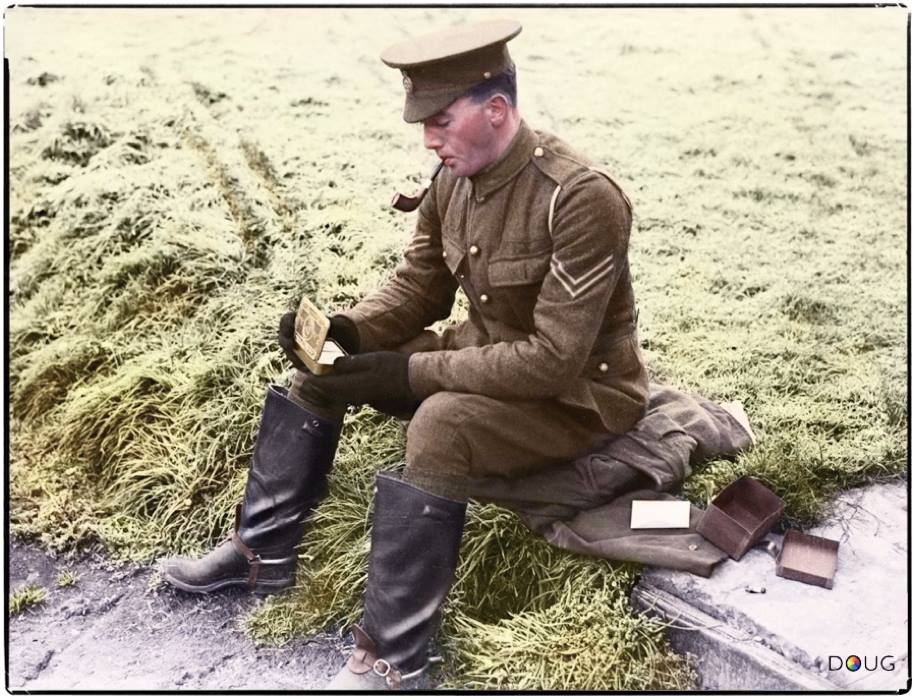 A British soldier resting near Aveluy Wood, just outside the town of Albert on the Somme.

(Colourised by Doug from the UK)